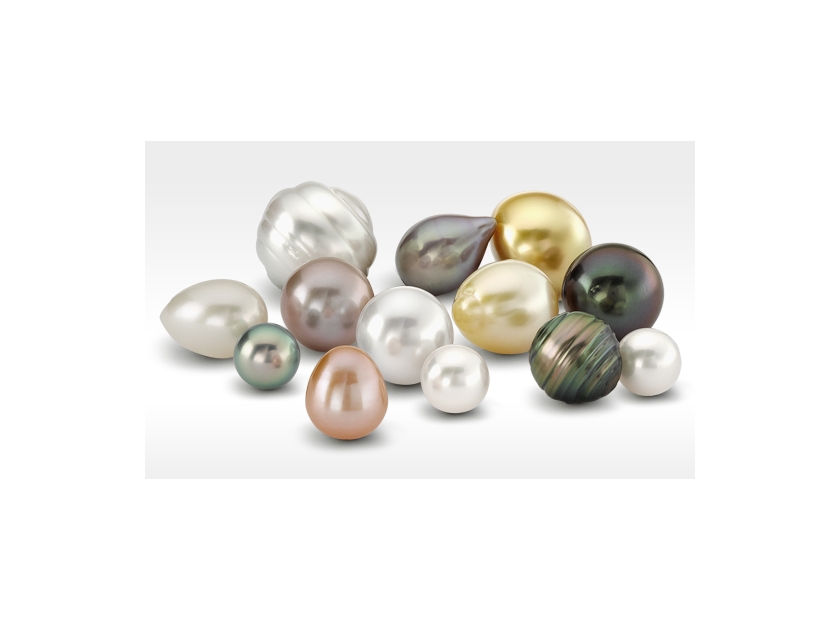 What makes Baroque pearls distinct from the conventional round shaped pearls is that that they come in fun shapes and sizes. This feature makes Baroque pearls a perfect choice to create gorgeous pieces of jewellery. Baroque pearls come in a variety of exciting shapes like coin (round and flat, with a smooth surface), egg (oval like an egg), rice, cross, square etc. Freshwater pearls come in widest range of natural colours – from pure white to cream, pink to orange and even lavender!Freshwater pearls usually are not as round as saltwater pearls and therefore less expensive.

However, the past two decades have seen a huge increase in their quality for a number of reasons, but mostly because in the mid-1990’s the pearl-farming industry changed the type of mussels they used and lowered the number of grafts inserted in the mussel, and thereby the number of pearls produced. Freshwater pearls today are a favorite of jewelry designers because of their lower cost and improved quality and availability.

Akoya pearls are bead-nucleated cultured pearls produced in the Pinctada fucata martensii and Pinctada fucata chemnitzii primarily in Japan, China, Vietnam, South Korea and Australia, with the majority of production (>95%) taking place in Japan. Also known as saltwater, seawater or cultured pearls, Akoya pearls are known for their perfectly round shape and bright reflective luster.

Akoya pearls are nucleated with a round bead (made from the shell of a mollusk), so the pearl is made up of layers of nacre over this bead. Because of this, Akoya pearls are generally very to perfectly round.So while grading doesn’t rely heavily on shape for Akoyas, there are some off-round and near-round Akoya pearls which are generally not desired.Only 2-5 beads can be nucleated in each Akoya mollusk, and ultimately only 1, maybe 2 pearls are actually produced and able to be marketed. These numbers are drastically different than the number of Freshwater pearls that can be produced, making Akoya pearls much more rare and thus, more valuable.

Very high luster Akoyas will have such a sharp reflection that it is almost mirror-like,this kind of luster is highly sought after (and paid highly for!).Akoya pearls only range in size from about 2mm-10mm,Any Akoya pearls above 8mm tend to be on the rare side, with anything over 9mm being very rare.

Tahitian Pearls come from the black-lipped oyster, ( Pinctada margaritifera) in the islands of French Polynesia. The oyster itself is quite large -- sometimes over 12 inches across and weighing as much as 10 pounds -- which often results in much larger-than-average pearls. The pearls are unique because of their natural dark colors.These are the only pearls that come in exotic natural colours. Mostly black, the Tahitian pearls also come in shades of dark green, brown and blue.  High quality Tahnitian pearls have excellent lustre. Sometimes the lustre is so high, that it has a metallic sheen. This feature, along with their fascinating colours, makes Tahitian pearls priceless and very fashionable.

This oyster is much larger than either the Akoya bearing or Chinese freshwater pearl oysters, Tahitians are harvested in larger diameter sizes. Typical harvests yield pearls ranging from 8-14mm.

Southsea Pearls come from the oyster called Pinctada Maxima.  There are two varieties of Pinctada maxima: the silver-lipped and the gold-lipped. The two are distinguished by the coloration of the outer edge of the interior.  Hence, the lovely silver and gold coloring of the pearls.  These oysters grow up to 12 inches in diameter, and can be nucleated with a much larger bead than other saltwater oysters such as the Akoya.  Hence, the huge size of South Sea Pearls!

South Sea pearls are by far the most valued and cherished pearl type on the market today. Known for their uncommonly large size ,growing them is painstaking and takes that much more time and natural white and golden colors, they have a unique luster and appearance shared by no other pearl type. This is also the reason South Sea pearls are expensive. Valued for their luster and rich colour, they come in a variety of gorgeous hues ranging from glossy white, silky silver, champagne, creamy pink to deep golden tones.